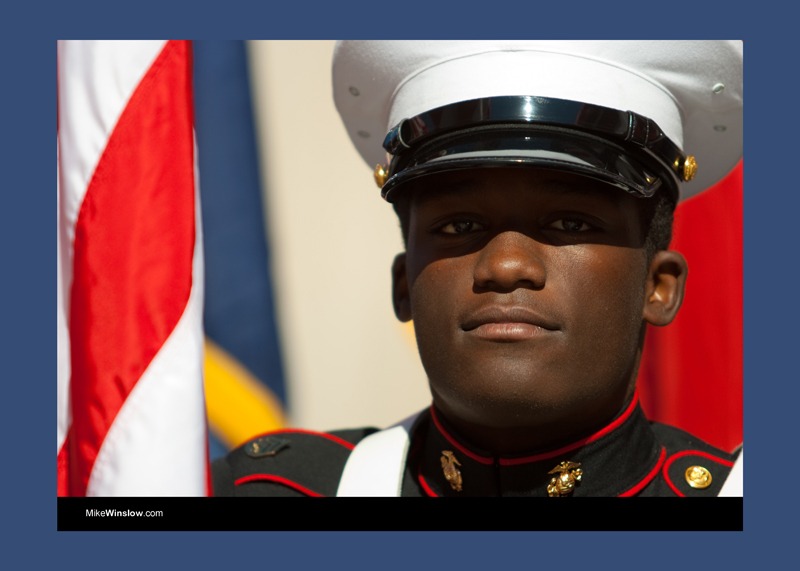 A week before Lance Corporal Jared M. Schmitz lost his life to a goddamned gutless suicide bomber in Afghanistan, my sweet wife broke her arm. After the second surgery, her follow up exam was scheduled downtown St. Louis for September 16th. That was the same day Lance Corporal Schmitz’s body would be moved from the funeral home in St. Charles to Jefferson Barracks National Cemetery.

The first half of our trip to the hospital was the same route the funeral procession would follow maybe 30 or 40 minutes later. Every overpass until we turned off the route at I-64 had become a tribute to this young man. There was at least one ladder engine, most had two engines hoisting the American flag There were law enforcement, there were soldiers, and there were thousands of solemn patriotic citizens lining the bridges and frontage roads waiting to salute this Marine in route to his final resting place.

What I witnessed that day was so moving and powerful that I find it difficult to describe. So here is a news reel video.

September 11, 2001 was the reason Lance Corporal Schmitz was in Afghanistan. It was an infamous day in the history of my country. And then the people of this nation united in stunning solidarity to comfort the survivors and fortify against the enemy.

The 10 year anniversary brought a very visual memorial to Art Hill in Forest Park, Saint Louis. Two thousand nine hundred and ninety six American flags were flown in remembrance of the civilians and first responders who lost their lives that day. The photograph below is how I chose to remember…

Monday September 13th I set my alarm for 90 minutes before sunrise so I could make some photographs of the 20th anniversary memorial on Art Hill. As I pulled up shortly before 6:00 a.m. the Star Spangled Banner was playing and there was a large crowd of patriotic citizen volunteers. As it turns out, they were there to take down the display. This is how I remember that morning.

I, like many of you, am troubled to see all the division in our country today. Certain politicians and the national media seem to be hyper-focused on using the pandemic to manipulate the citizenry for their own political gain and agenda. I wish our leaders and the media would focus on the big problems we have on the southern border and inflation in our national economy. I have a special distaste for those so called leaders that wear a mask to hide from the larger issues of crime, immigration and economics. But I was moved and encouraged as I witnessed the patriotism displayed this month. I honestly believe those who wish to hurt us still have something to fear.

Thanks for dropping by. This blog was difficult for me to write because I’m feeling rather raw at the moment.

I would be glad to hear your thoughts and comments in the box below.