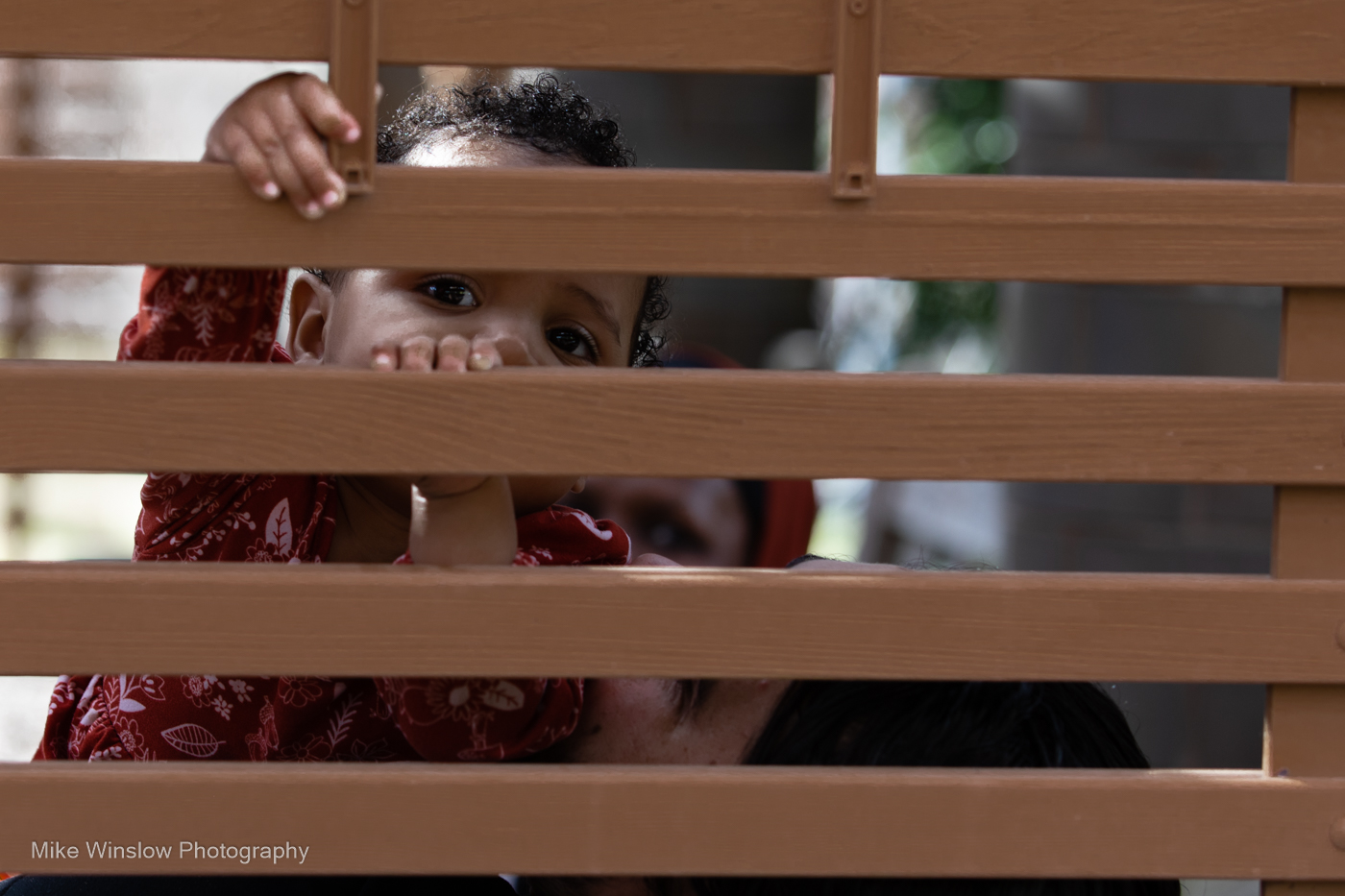 I once gave a speech regarding the two universes. The short version is this. The first and most important universe is “my universe”. This includes my thoughts, my worries, my plan, my destination, my family, my joy and me me me. The second and least important universe is “your universe”. I was sounding like a narcissistic asshole to make a point. It’s impossible to be a decent human or good citizen without realizing every other person’s universe is just a valid as mine.

I shot this photograph last week at the Missouri Botanical Garden. I was the “extra” in their universe, the guy on the hill with a camera. I captured 1/125th of a second of their timeline, just the slightest glimpse of their elaborate, chaotic, joyful, vivid and complex universe.

Here’s one possible scenario. The child feels trepidation as he faces this challenging river, but knows he’s safe because in the grip of his father’s strong warm hands. Dad’s anticipating a day in the future when his son will accompany him on a fishing trip. Momma just received a text from her sister (also the mother of a small child) inviting them over for a light dinner later that Sunday evening so the cousins could play together.

In order to be a decent human, I don’t need to know the details. I just need to realize that their universe is just as real as mine.

During the same visit to the Garden, I shot this photo of a small child sitting on it’s mother’s lap peering at me through a trellis. I couldn’t help wondering (sondering if you will) what the child’s name was, or where is family is from. I’ll never know, but I know her universe is as real as mine.

I have friends that started an online estate auction business. Auctions have never been my thing. I’ve purchased a few things from Ebay but that’s about it. So just out of curiosity I’d look in at the auctions Caring Transitions was offering to see my friend’s business in action. Low and behold, I was the winning bidder of this camera that has its own story. I can tell you a part of it as we sonder along.

As you can see, this camera lived a good comfortable life in its cushioned canvas home cared for all these 39 years by Richard Woods. Unlike me, Richard was meticulous about keeping his paperwork. The credit card receipt is dated December 17, 1983. I would sonder that Richard bought this camera for himself as a Christmas present. He mentioned to his wife after the fact and spent the night on the couch for busting the family budget. Later, moma forgave his indiscretion after she saw his wonderful photos. Richard was into travel and landscape photography and always kept his trustworthy AAA Roadmap of the United States (1982 edition) in his bag.

I don’t know what happened to Richard Woods. But now his camera and it’s story sit on my mantel, and that’s not the end of the story. No it is not. There is one last chapter to be written. There is film in the camera…

When you die, most likely the battery in your phone will die too along with all your pictures. Yes, digital is good, but if it matters, get a professional photograph and have it printed. The print will survive you and will survive the photographer. Photos will be a big part of your legacy provided they are there to find 40 or 50 years later.

I guess I’ll saunter along,
Mike

Ps. Much thanks to Michael Fritzius at Podcastify.me for bringing the word sonder to my attention.